This dish is named as such because it is traditionally eaten by Buddhist monks who are vegetarians. Various vegetables are cooked in soy-based seasoning until tender. In Nyonya chap chai, fermented soy bean paste (tau cheong) is used and often added with prawns.

According to wikipedia, these are the commonly used ingredients (source). Pick and choose ingredients that you and your family likes.

For the purpose of Chinese New Year celebration, I chose nine ingredients which number represents longevity. Each of the ingredients are auspicious, and which gives the dish both colour and texture. They are also easily available where I am.

Traditional Buddha’s Delight must not have garlic or leek. Pungent herbs – such as leek, onion, garlic – are avoided in some vegetarian diet. They are considered to be ‘hot’, and are believed to increase lust and anger (source: Bodhisattva Precepts)

On Five Pungent Herbs
A disciple of the Buddha should not eat the five pungent herbs — garlic, chives, leeks, onions, and asafoetida. This is so even if they are added as flavoring to other main dishes. Hence, if he deliberately does so, he commits a secondary offense.

Pungent herbs: “They are: leek, onion, garlic, and a few other such herbs such as asafoetida, an ingredient common in curries etc. Eaten raw they are believed to incite people to anger and disputes; eaten cooked they increase one’s sexual desire.” Buddhist adepts are advised to avoid them, as their consumption tends to disturb the peacefulness of the mind. “According to the [Surangama Sutra], garlic, three kinds of onions, and leeks are the five forbidden pungent roots. ‘If eaten raw, they are said to cause irritability of temper, and if eaten cooked, to act as an aphrodisiac; moreover, the breath of the eater, if reading the sutras, will drive away the good spirits.’” 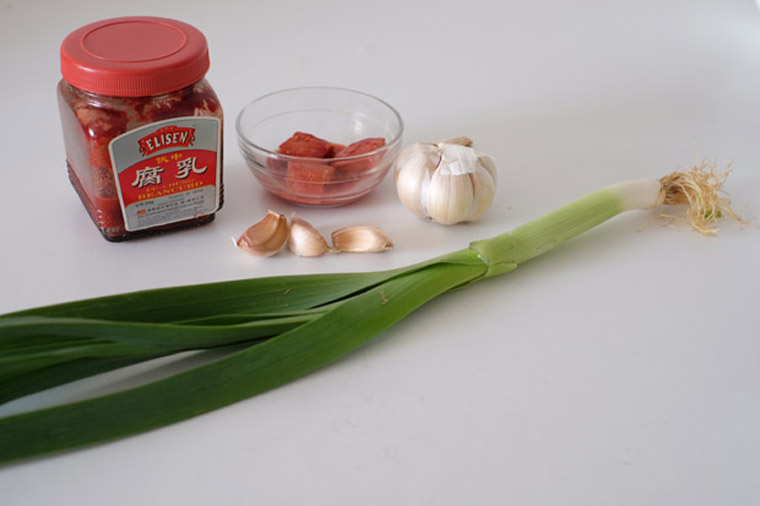 You can omit garlic, leek and even fermented beancurd if you like. In that case, instead of frying garlic and fermented bean curd, start with frying shiitake mushroom to compensate the flavour. Mushrooms, like garlic, contain glutamate (a compound in MSG) which gives a good umami taste.

However, the addition of garlic and especially red fermented beancurd adds another dimension to the dish. Do include them if you’re not particular about making traditional Buddha’s Delight; it’s so much more delicious!

Do you normally have the strict Buddhist version of this dish?