Though I hated the former, I could tolerate the latter. My mother made it almost every week. As I was more interested in other sweet beverages (e.g Coke) than this tonic, she’ll coaxed me to drink it by saying ‘it will make you beautiful and strong’.

Then, I thought it was something she said just to make me finish up the drink. I was wrong. My mother’s claim is backed by science.

High in iron and vitamins

Dates are inexpensive and rich source of nutrients. It has more vitamin C than an orange and vitamin A than a carrot.

A mere ten pieces of dates provides more iron than one palm-sized beef (Source: Singapore Health Science Authority). All theses vitamins and minerals, are known to be highly beneficial for the skin. According to Traditional Chinese Medicine textbook that I read , red and black dates relieves fatigue, anaemia and regulates appetite (Source: Between Heaven And Earth).

As dates replenishes qi and blood, red dates tonic is often served to girls after menstruation and mothers after childbirth. It is believed that a smooth flow of qi and blood translates to a rosy and lustrous complexion.

Now, I try to drink this tonic often. As I’m not a fan of putting much makeup on my face, I do hope that continuously drinking this tonic will spare me from putting on unnecessary foundation and blusher… 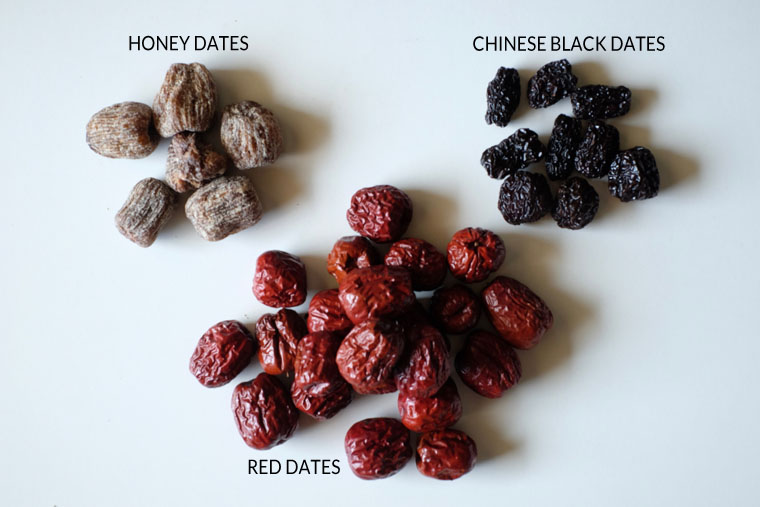 1. PREP: Rinse herbs. With a pair of scissors, cut red dates into half and remove its seed. 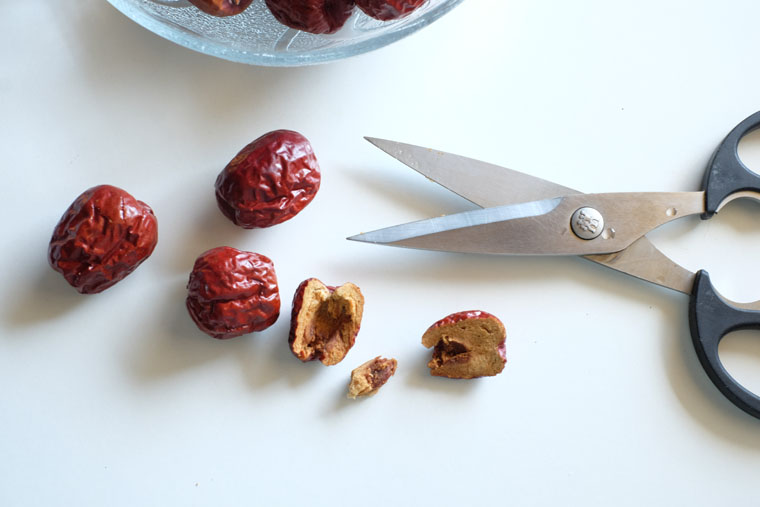 2. COOK:  Place all the dates and water in a pot. Bring to boil and then simmer for 2 hours. Or cook on LOW in the slow cooker for 6 – 10 hours for maximum flavour. I prefer to make this drink the slow cooker – throw everything into the pot before going to bed and wake up to a pot of nutritious sweet drink. Alternative medicine believe that it is best to drink medicinal tonic with an empty stomach for better absorption.

The above photos is boiled only for 1.5 hours. You can tell from the colour and viscosity of the drink. Slow-cooked red dates drink is deeper in colour, thicker, and pleasantly sweeter than normal.